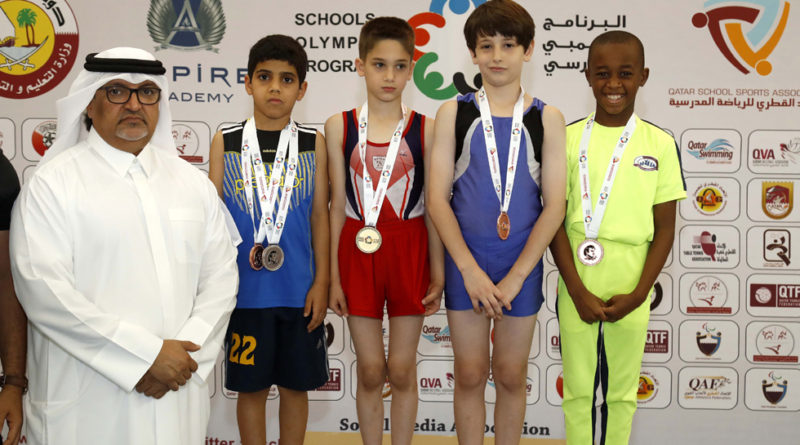 Doha, April 19, 2018, concluded at the Khawla gymnastics gymnasium in the school Olympic program, for the elementary and junior high schools. After the end of the competition Ali Al-Hitmi, president of the gymnastics union, secretary of the school sports union, crowned the winners of the colored medals. The final witnessed an exciting competition between the different schools, attended by a number of teachers and teachers of sports education in schools and coaches of national gymnastics teams, and the referees and officials of the Union, who organized competitions in a wonderful way.

In the ground movements, the first place was led by Abdulrahman Mosaad from the Khalifa Model School. In the second place were 3 students: Abdullah Al Dosari from Saad bin Abi Waqas Model School, Rashid Nawaf from Al Khor School and Zaid Khairi from the Iqraa English School for Boys.

In the jumping horse, Zaid Khairi of the Iqraa English School for Boys was replaced by Ward Zoghbi of the Newton Academy and Abdulrahman Mosaad of Khalifa Model School.

In the results of the teams for junior high schools – Level III – the team of Ali Bin Abi Talib School graduated first place, and the Jordanian school for the second place, and Hanaf bin Qais Preparatory third.

For his part, Ali Al-Hitmi, president of the Gymnastics Federation, confirmed the success of the current version of the gymnastics competitions in the school Olympic program. Ali Al-Hitmi said that gymnastics is one of the basic games in the program and is considered for them or the games because it provides all that the athlete needs in other games.

As for their role as a federation in the provision of school aids Ali Al-Hitmi revealed that they have started with the Olympic Committee this year in the “Be Sports” program to serve the school sport and under this cooperation will provide schools that have a real interest in gymnastics tools that help students to exercise, It has special needs and needs to meet the requirements of security and safety, and although it is an aesthetic game, but it contains difficult movements that no one can not meet the specifications of their practice.

Al-Hitimi said that the opposite is true. Schools benefit from the gymnastics federation because the union starts selecting elements from children of the age of three, while the schools start at the age of seven.