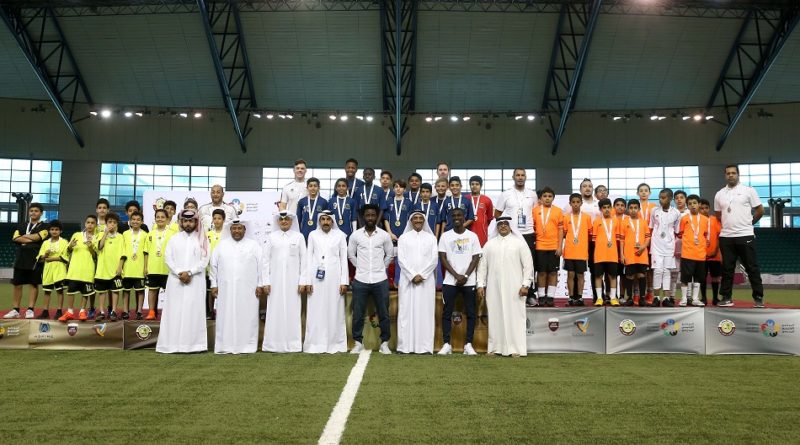 Doha, April 20, 2019 – All the boys competitions of the 12th edition of the Schools Olympic Program (SOP) concluded at the Aspire Academy of Sports Excellence. The finals were attended by a huge number of the VIP’s with aim to encourage these talented young children who play a vital role in the promotion of sports in Qatar.

Competitions witnessed a high technical level of the participating students amid the presence of officials and representatives from the Qatar Olympic Committee, the Ministry of Education and Higher Education, QSSA, SOP as well as schools representatives and students parents.

At the preparatory stage, Hamzah bin Abdul Mutallab School won first place, followed by the Philippines with silver, Cambridge School was on the third place with bronze medals.

Nasser al-Malki, Board Member of the Qatar School Sports Association, praised the high level showed by the students on the final day of the SOP competitions, it also demonstrated strength and great skills of many talented players in different games.

Nasser Al-Malki pointed out that the success of competitions did not come accidently, but it was the result of hard work for the years, as now the SOP competitions reached their 12th edition. A plenty of organizers and the schools that are involved in it.

Dr. Salah Salem, QSSA technical expert, expressed his great satisfaction with the success of the SOP in its 12th edition. He said: Everyone worked hard: the Organizing Committee, the participating schools, as well as the teachers and all others.

Dr. Salah Salem added: “At the technical level, SOP brought to us many promising young talents in different sport games.

Dr. Salem pointed out that there are many objectives of the Olympic Program, most notably the search of talents and everyone is aware of the importance of school sports and its positive impact on the lives of all.

Anis Masoud, Competition manager for Gymnastics, SOP, said that the most important result of this 12thedition is the obvious increase in the technical level of the players. This is the result of the partnership between QSSA, the Olympic I

In his turn Hassan Hossam Al Ahbabi, Director of Human Resources Department at the Olympic Committee, has said: “We have seen the excellence of the SOP, which demonstrates so many talents in various games, and this is good for sport”. Qatar produces talents that can become one day in the future a part of the sport clubs and we appreciate the efforts of all our partners who makes it true.”

“The Olympic Committee has always provided all the necessary support to achieve maximum success. This program is necessary for our society and contributes to the importance of sports for children in schools.”