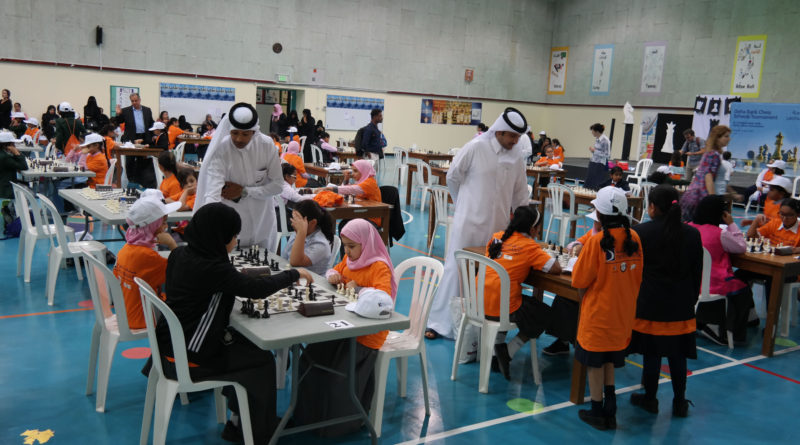 The participation in the Qatar Chess Championship was opened by the Olympic School Program, the eleventh edition, April 26-26, 2018 for primary schools
The Qatar Chess Federation, in cooperation with the School Sports Federation, will organize the second Qatar Chess Championship for the primary schools in the school Olympiad, the eleventh edition, from 23 to 26 April 2018 in the inner hall of Omar Bin Al Khattab Independent Model School for Boys
This comes after the successful success achieved by the first edition of the Qatar Schools Open Boys Championship for boys and girls in 2017 in the technical, organizational, media and active participation of players and players in the championship competitions, which ranged between 6 to 12 years with the participation of (59 schools) The number of participants was 332 students and the number of participating countries exceeded more than 100 players.
The Chess Federation finalized the tournament and set Monday, April 23-24 at 8:30 am for the Girls ‘Championship, and on April 25-26 at 8:30 am for the start of the Boys’ Championship. The event was held on Thursday 12/4/2018 at 11:30 am The date of acceptance of applications for participation and does not accept the participation of any school after that, followed by a technical meeting of all supervisors participating in the tournament on Sunday, 22/4/2018 at nine in the morning at the school of Omar bin Al Khattab Second Primary Independent Model Boys.
All the primary schools in the state were allowed to participate either governmental or non-governmental. Each school has 5 seats of players or players. The tournament rules and the rules of the International Federation of the game are to be set according to the Swiss system from 7 rounds of play time of 10 minutes per round, 3 rounds per day The first and 4 rounds on the second day for boys and girls.
Ali Al Hitimi, Secretary General of the school union, said that the union seeks to stimulate these small talents and horizontal expansion of the game in Qatar to build a broad base.
Al-Hitmi said in a press statement that the vision of the federation aims to build a generation of chess stars capable of leading Qatari chess to Gulf, Arab and Asian podiums. He praised the role of independent school administrations in encouraging students to practice chess.
The Secretary General of the Qatar Chess Federation, Mohamed Al-Mudheikhi, expressed his thanks and appreciation to the management of Qatar School Baccalaureate for its support for the championship for the second year in a row and its keenness to sponsor the competitions and events of this tournament, which will contribute to spreading chess among Qatari children and developing their mental abilities. This game has many benefits on the intellectual ability of the student and teach them to think in a flexible and wise and accelerated most of the world in the introduction of this smart sport in schools.
And the introduction of chess as compulsory in all schools, the state of Turkey was a forerunner and preceded by Russia and America as well as with Spain, Romania, Kazakhstan, Armenia and the Republic of Kalmykia.