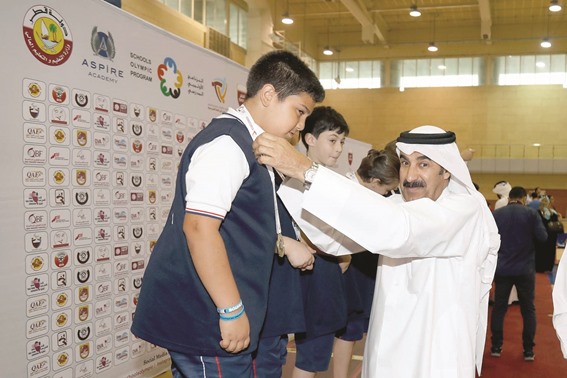 The Olympic Games concluded in the 11th edition of the Olympic Games by holding the final matches in all the different stages and levels of the tournament, in the presence of a large number of officials.
The winners of the competition were HE Rabia Al Kaabi, President of the School Sports Federation, with HE Ali Al Hattami, Secretary General of the Federation, Abdul Rahman Al Muftah, Executive Director of the Federation, Ali Al Malki, Secretary General of the Basketball Federation and Mohammed Ali Al-Subaie, Assistant Secretary.
The final matches were strong yesterday, with the Lebanese school team taking first place in the first-level competitions, the Al-Khor Second Team team, and the Dubai BS Indian School third.
In the second level, the Gulf School team won gold, Jabir bin Hayyan with silver and Hittin bronze.
In the preparatory stage, the Lebanese school team won first place, then the Philippine school again, and the Egyptian school of languages. At the secondary level, the Philippine school team was crowned with gold, the Doha School team finished second, followed by the American Academy in third place.
The teams participated in the finals, the technical levels distinct among the presence of coaches and experts by the Basketball Association, as well as clubs participating in the Championships, to choose the best elements and inclusion of the clubs, and then benefit the different national teams.
For his part, HE Rabia Al Kaabi praised the levels presented by the school students in yesterday’s competitions, stressing that the program confirms day after day the achievement of its goal in presenting stars in different games for our different clubs, and this is an important and objective of the program. He added: “Without doubt, this great participation by different schools in the program and the presence of this large number, confirms the desire of everyone to make the most of the technical benefit of the copy of this year, and this is important for all, and we are happy to participate and we congratulate the winning schools and wish success to all. The upcoming finals of various games ».
Rabia Al-Kaabi said: “We thank the Basketball Association for its efforts to finish the basketball finals in the desired manner and to achieve the success we seek, as the hall was well equipped and the keenness of the Federation officials to be present and follow-up, which is good.”
Rabia Al Kaabi concluded his remarks by saying: “We seek in the Organizing Committee that the competitions, not just the finals, are at the highest level in order to ensure the great success of the program, and all of us are partners in this success, and thank them for their efforts in the last stage and wait for more in the stage. Coming ».

Al-Maliki, Secretary General of the Basketball Federation, expressed his happiness with the levels presented by the students on the final day of the basketball competitions in the Olympic school program, where the finals were successful and the levels are good.
“The Olympic program is very distinctive and shows many talents in various games, and this is good for basketball and follow up the different players emerging from the clubs, and I wish everyone success in choosing the good elements that can give the addition of clubs.

“The levels presented by the school students yesterday are very distinct and showed the presence of many talented players who will have a role in the next stage with our clubs, especially since 80% of these players do not participate in clubs,” said Ali Al-Hitmi, secretary general of the school sports union. Ali Al-Hitmi added: “The rest of the finals are waiting for us in the various games and we are preparing them well. The organizing committee has been working around the clock for the last period so that the organization for the final day in any game is very special. All for their efforts to achieve this.

Key: Everyone enjoys the finals

Abdul Rahman Al Muftah, Executive Director of the School Sport Union, said that the Organizing Committee has been working around the clock for the last period, so that the organization for the final day of football will be good, as will all the upcoming games in the finals. Very, as is the custom annually.
He added: “Everyone enjoyed the volleyball finals and the presence of officials in the Union, headed by Ghanem Al-Kuwari, the president of the Federation this final day, where he was distinctive, and we expect that the final football today is distinct and has a large presence of all participants.”
“We are very happy with the levels we have seen in the Olympic program this year, and we wish success to all, and at the same time we hope to see more strong levels in the next phase.”

Mohammed al-Subaie:
The games showed many
Of new talent

Mohammed Al-Subaie praised the levels he saw in the Olympic program in this year’s edition, stressing that the matches showed that there are many good talents that can have a future in the game. “We have been keen to manage the matches for the championship by the referees accredited by the Union, so that these young players get used to such encounters in the future and play legally to help them to provide the best». “The Olympic program offers an important mathematical message in various games, an ambitious program that has achieved success over the years and has shown many outstanding players.”

Today: the conclusion of football competitions