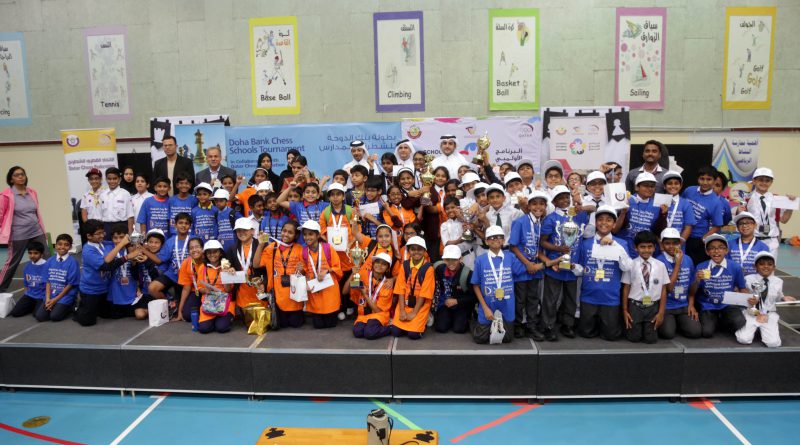 Qatar Chess Federation, Qatar’s primary school for chess, participated in the 10th edition of the Olympic program in the internal auditorium of Omar Bin Al Khattab Independent Model School for Boys in Al Gharafa. The Chess Federation finalized the tournament and set the final deadline for closing the tournament on Thursday. All primary schools in the state were allowed to participate either governmental or private. Each school was given 10 seats of players or players under 12 years of age. The game is to be held according to the Swiss system of 7 rounds, 3 rounds on the first day and 4 rounds on the second day for boys and girls. Ali Al-Hitmi, Secretary General of the school union that the Union seeks to stimulate these small talents and horizontal expansion of the game in Qatar to build “The vision of the federation aims to build a generation of chess stars capable of leading Qatari chess to the podiums Gulf, Arab and Asian, and praised the role of independent school administrations to encourage students to practice chess. The Secretary General of the Federation Chess, said that the vision of the school Olympic program, which aims to motivate young people in Qatar to participate in sports activities and to adopt an educational method that develops mental and mental abilities is compatible with chess. For his part, Salman Salman, an expert in the Chess Federation said that the tournament for the first time witnessed a huge participation of independent and private schools and will be held within the Olympic school program for the first time after intensive meetings held by the Federation with the Office of Educational Supervision in the ministry and the curriculum section to seek the adoption of chess in the teaching process In schools as part of the goals to raise the level of students scientifically and develop their mental and mental, and chess is a mental sports that help the mind to develop the skill of intelligence and thinking and awareness, which will be reflected at the level of students. Chess has been adopted to enter the eight schools in the country to adopt the game within the school curriculum in physical education classes.