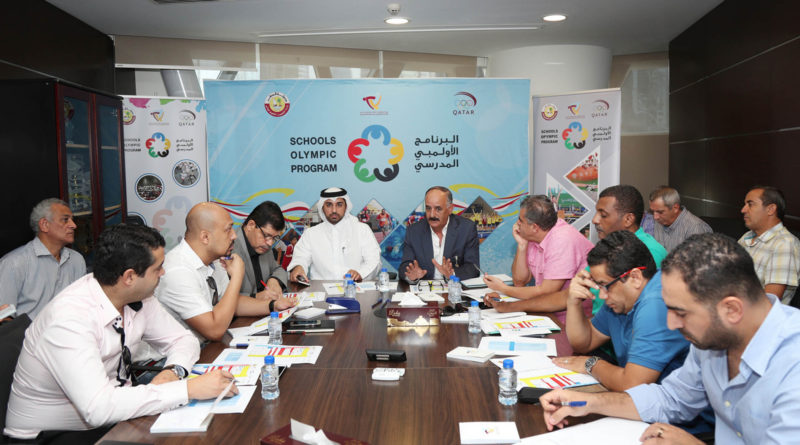 The Organizing Committee of the Olympic School Program held a meeting of the contest directors of the program at the headquarters of the School Sports federation to discuss the preparations for the launch of the 11th edition of the program.
The meeting was attended by Abdul Rahman Al-Muftah, Executive Director of the School Sports federation, Dr. Salah Salem and Fajr Al-Kubaisi. The competition managers from the participating federations attended the new version.
The list of attendees included Ahmad Tantawi of the Basketball Federation, Ibrahim Al Mohannadi of the Shooting Federation, Haytham Abdul Hamid Imam of the Swimming Federation, Anis Saud of the Gymnastics Federation, Mohammed Sami Abdul Ghani of the Taekwondo Federation, Judo and Cartesian, Khalid Al Suwaidi of the Fencing and Weightlifting Federation; Fahad, Hashem Abdul Rahim Mohammed of the Volleyball Association, Fares Mohammed Hussein of the Athletics Federation, Mohammed Suhail of the Federation of Special Needs, Wahid Aliywa and Ihab Awad of the Tennis Federation.
Al-Muftah thanked all of them for their efforts to make the success of the last edition. He also talked about the objectives of the Olympic School Program, which was to support the development of sports in Qatar and increase awareness of sports concepts and Olympic values.
The meeting discussed the proposed schedule of the organizing committee of the program and its distribution to the contest managers to confirm the dates, prepare the competitions plan, prepare the generalization of the tournaments, the lists of participants, the terms and conditions of the tournaments.
He stressed the partnership between all the organizers of the program, and keen on the success of the previous version, and then search for the success of the new version of this national program leading, which is organized for the sons and daughters of the homeland, and proud of the participation of the masses of students and growing students over the years.
Salah Al-Din Salem presented the regulations and regulations of the Olympic program for the Olympic program competitions. He referred to the important role played by the referees and technicians by applying all laws and regulations.
Program Goals
The Organizing Committee of the Olympic Program has identified the objectives of the program this year, namely the establishment of a sports culture that calls for sports for health and life, and to provide an attractive environment for male and female students to encourage physical activities.
The Ministry of Education, the Supreme Council of Education and the Health Institutions, and the promotion of sport in all kinds of schools in the country to achieve the objectives of school sport and develop them.
The program also aims at promoting the basic principles of the Olympic Movement in the context of sports activities, supporting and developing sports performance, and emphasizing the exercise of the greatest possible number of employees of the State Schools for Boys and Girls.
The Olympic School Program – in this year’s edition – is supervised by three bodies: the Olympic Committee, the Ministry of Education and Higher Education, and the School Sports federation.