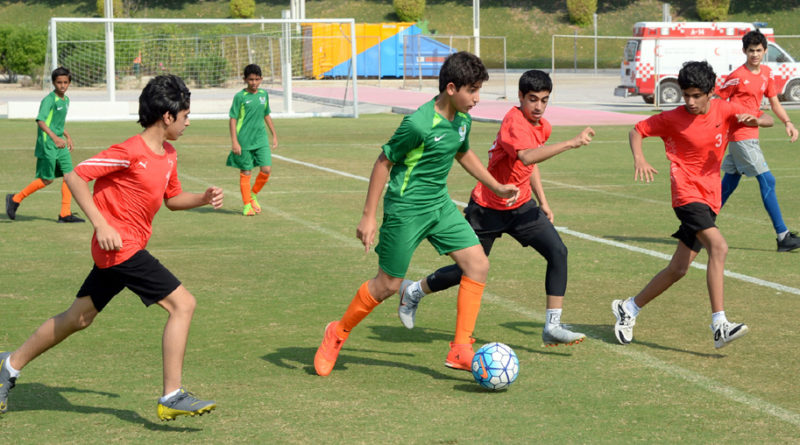 DOHA, December 4 , 2019. HE Sheikh Khalifa bin Khalid  Al Thani, the Chairman of the Organizing Committee of  the  13th edition of the Schools Olympic Program (SOP) has lauded and highly appreciated the outstanding performance of students from different schools in the SOP competitions so far.

In a press release on Tuesday, Sheikh Khalifa said the competitions are going regularly and impressively and will help us redoubling effort to discover more talented students.

He also voiced that the Schools Olympic Program is among the most significant projects backing school sport in the country which the SOP Organizing Committee,  in cooperation with the Ministry of Education and Higher Education and the Qatar Olympic Committee, first implemented in 2007/2008 school year under the theme “Sports and Health”.

The 13th edition of the Schools Olympic Program continues in the atmosphere of excitement, especially in football competitions, which take place at the Aspire Academy for Sports Excellence venues and witness not only a distinct number of participating schools and players but also many follow-up officials and scouts from various national sport clubs including the Aspire Academy who take every opportunity to spot the most promising and talented school children.

Among those who demonstrated high technical skills during the competitions were the following students of Al Andalus School: Hamad Abdullah Al-Hajri (2005), Abdulrahman Ali Al-Mannai (2005), Saleh Khalid Al-Kuwari (2005), Abdulhadi Abdullah Al-Dosari (2006), and Ghanem Abdulrahman Al-Darwish (2007). All of them are vying for the title of the current edition of the Schools Olympic Program.

Hamad Abdullah Al-Hajri (2005) and Abdulhadi Abdullah Al-Dosari (2006) stressed the importance of sports in general and the SOP competitions in particular saying that the initiative is a great opportunity to showcase and develop students’ talents and abilities.

Ghanem Abdulrahman Al-Darwish (2007), in his turn, thanked all the officials for giving young sportsmen a chance to take part in various sports activities and meet their peers from different schools.

The SOP is held annually as a collaborative effort of to encourage hundreds of students athletes competing from all over Qatar.

The SOP Committee aims to spread a culture of sports through Qatar’s schools and to engage the entire community in active and healthy lifestyles while retaining local values and traditions.