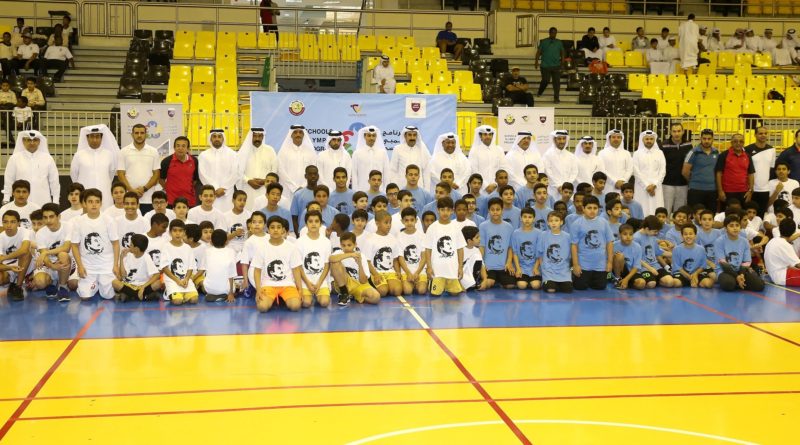 The school Olympic program kicked off yesterday in the 11th edition of the 2017/2018 season at the Qatar Sports Club with the participation of 214 schools for boys.

The ceremony was attended by HE Mr. Jassem Rashid Al Buainain, Secretary General of the Qatar Olympic Committee, HE Rabia Al Kaabi, Undersecretary of the Ministry of Education and Higher Education, Chairman of the School Sports Union, Khalil Al Jaber, Director of Sports Affairs, Ali Al Hitmi, Secretary General of the Federation and Abdul Rahman Al Muftah, Executive Director. And many guests and participating schools.

The new version of the program is the presence of 11 games, including 4 group games (football, hand, plane and basket), as well as individual games (gymnastics, swimming, athletics, table tennis, fencing, tennis and shooting). The opening of the program marked the start of the basketball and football competitions.

Speaking at the opening ceremony of the program, Secretary-General of the Qatar Olympic Committee said that the Olympic school program is a strategic project and needs a lot of work and focus on selecting the talents involved in it to increase the benefit in the interest of Qatari sports. He hoped to reach the goals Desired.

He stressed that the Qatar Olympic Committee is supportive of the Olympic program of school significantly even after the Union of Sports School supervision of its implementation, especially that the objectives set for the Olympic program in the public interest regardless of who is responsible for the organization of this event.

“We are looking forward to achieving many of the positive objectives of this project, which was launched years ago, and of course, the removal of athletes capable of serving the sport of Qatar is one of our top priorities of this program, and this will be achieved only by concerted efforts and everyone to take advantage of the possibilities that exist in the ideal With a focus on the importance of achieving the objectives set for the Olympic school program. ”

For his part, Ali Al-Hitmi, General Secretary of the School Sports Union, expressed his confidence that the new version of the Olympic school program will come especially distinguished in light of the participation of a large number of schools in it and the readiness of the Union to organize it with its technical and administrative cadres.

Al-Hitmi said that the start of the program since the beginning of the season this year will make achieving the goals easier. He pointed out that the start came as the previous version was delayed due to the transfer of the program from the Olympic Committee to the Union, which is now fully managed, and expressed the hope that the current version A real experience of the Union.

He added that the goal is to provide students with a large space to exercise and instill value among them as an important factor in building a civilized Qatari society and achieving Qatar’s 2030 National Vision for Human Development.

“We found that the majority of competitions in schools will revive and strengthen school sports, and give students some kind of change, because when we evaluate them outside schools we deny a large number of students to participate and benefit from interaction with the program,” said the Secretary-General.

HE Rabia Mohammed Al Kaabi, Undersecretary of the Ministry of Education and Higher Education, President of Qatar Sports School Federation, said that the participation in the current version of the Olympic school program, which reached 400 schools, whether governmental or private, Sports in the Qatari community for community service and ensuring a great level of public health.

“We will work on more talent discovery in the school program, especially since there are technical committees in each of the participating federations to follow the competitions and choose the best players in order to benefit from them in the future and to establish an appropriate base of athletes on the level of more than one game, To reach this goal for the benefit of all, and the fact that the unions participating in the current version is very cooperative with the school sports union in order to achieve the goals set, and was postponed the launch of the program this year for ten days because of hot weather in order to achieve And the health of students participating in various competitions. ”

In a statement, Khalil Al Jaber, Director of the Department of Sports Affairs of the Olympic Committee, said that the Olympic program since its first edition achieved the goal of launching it is to expand the practice of sport to all age groups.

Al Jaber said that over the past years each year, participation is more than the previous year. Not only that, but the continuous thinking of developing competitions for the benefit of sport, such as in the swimming association, we have benefited greatly from the Olympic program by providing us with promising swimmers who are now in the national teams Different.

“Without a doubt the program has achieved great success in the past years and everyone wishes to continue these successes in this year’s edition and I wish success to all.

Abdul Rahman Al Muftah, Executive Director of Qatar School Sports Federation, also praised the opening day of the school’s Olympic program and said: “We are delighted with the atmosphere we saw at Qatar Club with the great participation of many schools on the opening day and this makes us expect strong and standard participation from all.”

He stressed that everyone in the Qatar Sports School Federation seeks to be organized this year’s edition is distinctive, especially that the participation is large and will continue until next April and everyone wants to participate and achieve the best achievements during this edition.