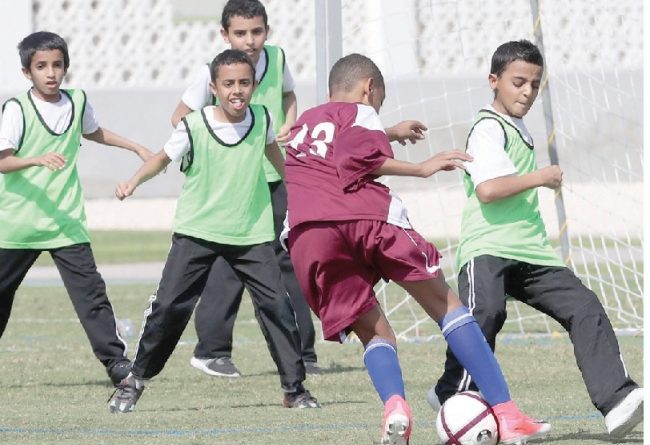 The eleventh edition of the Olympic program continued and the football competitions took place at crucial stages in the various stages of the age. Most of the participants were qualified for the knockout stages. The finalists were selected for the second round of the first level, which will be held on 11 In December, where most of the participating schools presented a distinguished level in the competitions held on the grounds of the Academy of Sports Excellence Aspire in the presence of officials in the Academy as well as in the Olympic school program in addition to a large number of aspiring club coaches ¥ In selecting the best of different schools and joining them to clubs.
The list of candidates for the second round included eight schools, namely Umm Salal, the Arabian Gulf, Saad ibn Abi Waqas, Al-Mutni bin Haritha, Abi Hanifa, Khalifa the Model, Abdullah Bin Zaid Al-Mahmoud and Al-Wafa.
In the first level, the Umm Salal School team wins 4 points from a match in Smimsma with a 5-1 draw and a 1-1 draw with Abdulhamid Al Dail.
Umm Salal and Umm Al Amed played a playoff to determine their qualification for the critical stages of the qualifiers and Umm Salal team managed to win 3-0.
At the same level in the second group, the Arab Gulf team qualified for the second stage, which will be held on December 11 next, after leading the group with 7 points of winning two matches and a draw in one match with the school of Juaan bin Jassim 5-5 and won the school Alokir 5-1 Abu Ayyoub Al-Ansari’s 3-0 school has to withdraw.
In the third group, Saad Bin Abi Waqas’s team qualified for the second round with 9 points from three games in Al-Sincerity 3-2, then Roda Rashed 3-0 with a draw and then Osman Bin Affan 5-2.
In the fourth group, Al Muthanna Bin Haritha qualified after the top spot of the group with 6 points to beat my beautiful school Dukhan 3-0.
In Group 5, Abu Hanifa’s typical school qualified for the second round after leading the group with 9 points and the competition in this group was very strong among the participating teams.
The qualification of Abu Hanifa school after winning the sunrise 5-1, then on the school of Omar ibn al-Khattab difficulty with a result of 3-2 and then on the school Saud bin Abdul Rahman 4-2, and Al-Shorouk school came in second place with 6 points.
In Group 6, the Khalifa Model School qualified after winning 7 points with a 10-0 win over Kamal Naji, then Al Quds 7-0 and a 1-1 draw with Malik Bin Anas.
Abdullah Bin Zaid Al Mahmoud also stepped up for the second stage after leading the Group 7 with 7 points by beating Ali Bin Abdullah 4-3, defeating Al Qadsiya 6-3 and drawing with Abdullah Bin Turki 3- 3 and qualify for the goal difference from the team Abdullah bin Turki school, which collected the same points.
In the eighth group, Al Wafa School qualified for the second stage after winning 6 points from Bilal Ben Rabah 5-0 and Hittin 6-0.