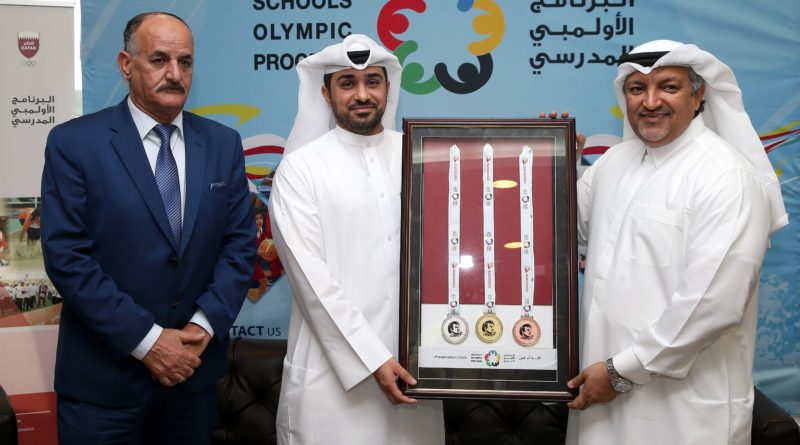 The School Sports Federation inaugurated the new medals for the current season of the Olympic program under the theme “Tamim Al Majd”, in order to encourage and encourage all participants and participants in the activities of the program this year to rise the podiums and medals.

“The current version of the school Olympic program will be distinguished from its predecessors by His Highness Sheikh Tamim bin Hamad Al Thani, the Emir of the country, who has become a symbol of steadfastness and a symbol of giving to his people,” said Ali Al-Hitmi, Secretary-General of the School Sports Union. And residents in Qatar. ”
He also praised the participation of both public and private schools.

Al-Hitmi pointed out that the school sports union attaches special importance to the Olympic program competitions and seeks to be as good as possible. The participation is also a record. He thanked HE Sheikh Jowan bin Hamad Al-Thani, President of the Qatar Olympic Committee for the continuous support of the program and also to the Ministry of Education and Higher Education. The school sports are heavily provided and the facilities offered within schools.

For his part, Mr. Abdul Rahman Al-Muftar, Executive Director of the School Sports Union, expected that the current version of the program will achieve many of the goals set for it after the increase of the participation rate among the school students, which reached 214 schools for boys (119 public schools and 95 private schools) (105 public schools and 81 private schools).
He explained that this year’s edition of the program witnessed competition in 11 games, including 4 group games (football, hand, plane and basket), as well as individual games (gymnastics, swimming, athletics, table tennis, fencing, tennis and shooting).

For his part, Dr. Salah Salem, technical expert of the school sports union, talked about the objectives of the school Olympic program which was to support the development of sport in Qatar and increase the level of awareness of sports concepts and Olympic values.

He noted that the school Olympic program has achieved a lot of achievements, as the number of students and students participating in it is constantly increasing, and the slogans that are working to contribute to the establishment of a lot of noble meanings, and revealed that a map was circulated containing schools hosting the competition.