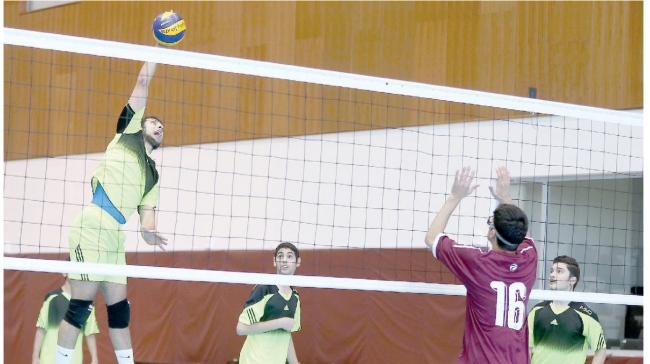 A number of matches were held at the Hall of the Federation of the Arab Club in the volleyball competitions of the school Olympic program in its current version at the level of private secondary schools. Within the first group, the Syrian Community School team won the Jordanian school team with two matches for nothing. Al-Khaleej International School. The MES International team managed to beat the Global School team in Shouteen for nothing, and the Pakistan International School team decided to win at the expense of the Al-Khor school team with the same result. Bangladesh international scored the result in his match against Newton International School and defeated him by two for nothing.
The competition continues in the coming period in order to resolve the winners to the second round, which will be held in the knockout system.
The officials of the organizing committee of the school program are interested in volleyball competitions especially since there are many young players who have become the focus of attention and follow-up coaches in the clubs in order to discuss the possibility of benefiting from them in the coming period. The Federation of the aircraft headed by Ali Ghanim Al-Kuwari is very interested in the game on And the keenness of Al Kuwari to continue the launch of the school Olympic program in the plane in order to encourage students to practice the plane as educational institutions an important source of sports cadres in Qatar.
On the other hand, the Olympic Games Olympic program was announced in its current version after a number of amendments were made to ensure the regularity of the competitions on the level of the 11 games in this version of the collective and individual game.
The 11th edition is held with a large school participation, which reached 400 schools between government and private at the level of boys and girls under the supervision of the Ministry of Education and Higher Education, the Qatar Olympic Committee and the Qatar School Sports Federation. Collective games are football, handball, basketball and volleyball. Gymnastics, athletics, table tennis, swimming, dueling, archery and cycling.
He concluded the first week of the secondary school tournament in its fifth edition organized by the Sports Union School in cooperation with the Federation of Football, with the participation of 20 schools were divided into three groups .. The first week games were held on the stadiums of the club and Al Arabi and Al Sadd club and Al Khraitiyat club .. In the group Al-Arabi Stadium The Hassan Bin Thabit School team defeated Al-Doha High School 4-0. The Tarek Bin Ziyad and Qatar Technical Schools team scored a goal for each team. In the third game of this group, Khalifa School won the Al Wakra School 9-0.
The second group, which was held at the Al Sadd Stadium, saw Ahmed Bin Hanbal School beat Al Jamiliya 4-1 and Ahmed Bin Mohammed School won the 2-0.
In the results of the third group, which was held at Al-Kharaitiyat Stadium, the team of Ibn Taymiyyah won Al-Zubarah 8-0, Hamad Bin Abdullah Al-Shamal won 9-0 and Abdullah Al-Misnad won 3-1.
“The competition is strong and good by the participating schools in this year’s edition, where everyone seeks to make the most of this participation, whether by discovering talents and presenting them to clubs and national teams, or reinforcing the importance of sport in young students. good.
He added: “We are very happy with the success of the Olympic School Program since the first edition so far. This success has not come from a vacuum, but from the great support of the program from the officials, as well as the efforts exerted by the schools with the trainers and students. All of them.
Al-Hitmi referred to the Olympic program as a tributary of achieving the national vision and its goal in building a healthy and prosperous society.