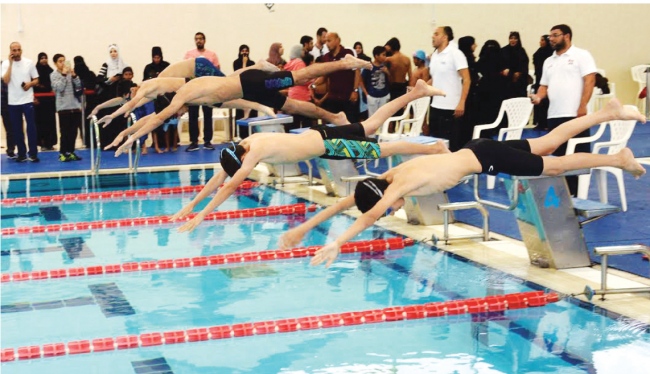 The swimming competitions at all levels were concluded by the Olympic school program amidst a large participation of students in the swimming pool of the Arab club .. The crowning of Talal Mubarak Al Darwish Secretary General of the Swimming Federation and Nasser Al-Maliki Assistant Secretary of the Union of Sports School and Abdul Rahman Muftah Executive Director of the Union .. Especially since participation in it was record.

At the first level, Abdul Aziz Ismail of the Tunisian School won the first place in the competition of free swim Alquain high with the start and the solution of Hamza Mahmoud Ibrahim from Cairo Private School II and Jihad Badr al-Din of the model Wafaa III.

In the backgammon competitions for the same level, Abdul Aziz Ismail of Tunisia won gold and Amr Samer of Cairo in silver and Abdul Ghafour Khadash of the Maghreb International bronze .. In the two strikes of two men in the free board Jihad Badr al-Din won the gold and his colleague in the same school Saud Khalid and silver Muthanna Ben Haritha bronze.

In the two strokes of the two men appeared in the board won the first place preferred Mustafa Alaa of the Egyptian language gold, and Ishan Goutam of Birla silver and his colleague Sherry Basvijo bronze .. In a two-footed with free arms won gold medal Omar Al-Masri from the German International School and Abdul Latif Jassim Al-Mohannadi from Al-Manar International Silver and the third in the name of Sami of the Egyptian Language Bronze.

In the race of beatings of two men with arms back won first place Mohammed Hani from the school of Hammad first place, followed by Abdul Rahman Osama Salah in second place and then Branf Basic of the International School Al Khor third place .. In a free float won first place Rami Mohammed from Newton International Center First from the school Birla second place and fellow Hassan Khorad in third place .. In the buoyancy Hassan Khorad won from Birla gold and then teammate Ishan Gautam silver and then Ariush Mishra of DBS Indian School in third place.

In the race 25 meters back won first place Abdullah al-Khunji gold and then Sevaseri of the international creek silver and Joseph Hani of the bronze Hammad .. In the 25 meters butterfly won the gold Ahmed Mohammed Jaber bin Hayyan and then Ali Abdullah al-Nuaimi of Qadisiyah model silver and Khalid Fahad Hussein of the Oryx Academy of Bronze.

In a two-man race, Al-Khoury won the gold medal with Abdul Rahman Ehab of Al Khor School, Ryan Ismail of Tunisia, and Mohamed Ali of Cairo for the third language. And George Philip of Birla III .. And the race of two-stroke butterfly Balboerd Glenn Karbalova of DBS Hindi gold and Abdullah Khnji of the Academy of the island silver and Kevin Mumthiro of Birla bronze.

At the third level and in the 200 meter race, Nooruddin won the Hamza Bin Abdulmutallab School of Gold, Joshuma from Al Khor International School and Nassar Tarik from Omar Bin Al Khattab School. In the 50 meter freestyle, Mahmoud Al-Manar in Silver and Mohammed Fahd Hussein of Al-Maha Academy in Bronze.

In the 50 meters race, Mohamed Mahmoud of Al Manar won gold, Mohamed Amin of Tunisia won silver and Noureddine of Hamza Ben Abdel Muttalib in bronze. In a different 4 × 50 relay race he won gold in the Egyptian school, Tunisian silver and bronze DBS in India. 50 free Egyptian won the languages ​​of gold then Tunisian and then Birla.

In the 50 meters butterfly, he won the gold, Ishan and silver, Mohammed Mahmoud and Balbrons Mohammed Fahd Hussein .. In the 50-back race won gold Noureddine and silver Mohammed Aziz and Balbrons Youssef Hani.

In the competition of the fourth level and a 200 meter individual race, Firas Al Saidi of Tunisia and Ross Philippe of Al Khor International won silver and Khalid Mohsen of Ahmed Bin Hanbal in bronze. In the 50 meters freestyle, Mohamed Saad won gold, Ali Shaheen in silver and Mohamed Hani in bronze.