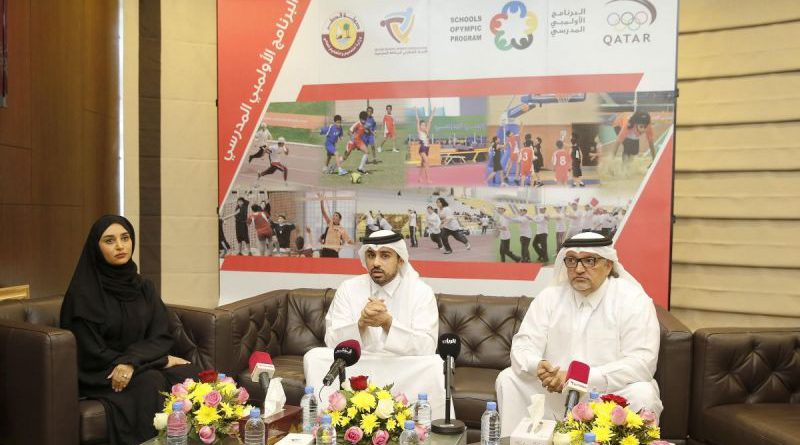 The Organizing Committee of the Olympic School Program has revealed the details of the tenth edition, which will be launched on 19 February, through an extended press conference held today at the Qatar School Sports Federation.

The conference was attended by the Secretary General of the Federation of Sports School, Abdul Rahman Al-Muftah, the Executive Director of the Federation, Fajr Al-Kubaisi, member of the Board of Directors of the Federation and Hind Ali Al-Ibrahim of the Sports Affairs Department of the Olympic Committee.

The Olympic program will start from 19 February and will be concluded in the first week of May. Seven games have been approved in this year’s edition, including 3 group games and 4 individual ones. Participation will be limited to independent schools due to time constraints.

Speaking at the beginning of the press conference, Ali Al-Hitimi said: “On behalf of the Chairman of the Qatar Sports School and the Board of Directors, we thank everyone for attendance and support before the launch of the new version of the Olympic School Program. Al-Kuwari, Secretary-General of the Olympic Committee.

“This year, the organization will be organized by the Federation in cooperation with the Ministry of Education and Higher Education and the Olympic Committee, and it represents a challenge for us to get the program in its best form and suit in line with our ambitions and also to achieve the objectives of this ambitious program.

“I thank Fawzia Al Khater, Director of Education at the Ministry of Education and Higher Education, for the great cooperation we have with us and the strong desire to make the new version of the program a success and thank all those who contributed to the success of the previous versions of the program which is a landmark and distinguished not only at the local level, Where the program has been presented in many international forums as an ambitious country program that cares about school sports and has achieved great success.

Ali Al-Hitmi revealed the games that will be in this year’s edition. He said: The competitions will be held in seven games, three of which are football, basketball, handball and four individual games, namely shooting, gymnastics, swimming and athletics. Next year .

Al-Hitmi pointed out that the most important focus of the Organizing Committee of the Olympic Program is to maintain the achievements of the program and the success achieved in the past versions. He said: We agreed to manage the organization of this version and we face great challenges and the most important process of rationalization and we hope that the organization is distinctive and achieve all the objectives and aspirations expected from copy This year .

“Without a doubt, the ministry’s support for us and the Olympic Committee will contribute significantly to the success of this year’s edition. We know the magnitude of the challenge ahead and we will work hard to ensure the success of the program and to be at the highest level and increase the interaction between students and their schools,” he said. At the same time, talent is being discovered, especially since the trainers from all the federations will follow the program to see the talented and join them and wish success to all to be exceptional exceptional version.

A new challenge for the Organizing Committee

“The organization of the tenth edition represents a great challenge for us in the Organizing Committee and we seek to have the organization distinct and keep up with the importance of the event and the objectives to be achieved, especially that school sports is very important in the discovery of talent.

“We thank HE Sheikh Joaan bin Hamad Al-Thani, Chairman of the Olympic Committee and HE Dr. Thani Al-Kuwari, Secretary-General for the continued support of the Federation and the program and the continuation of the competitions.

He pointed out that the support of the process of organization for us is very important in that the copy is distinct in everything and we rely on the distinguished cadres have already worked in the program before and achieved great successes and we are confident that the organization will be distinctive and hope to succeed everyone in this copy General.

Fajr al-Kubaisi, a member of the board of the Sports Sports Federation, confirmed that the Olympic program is one of the most important programs because of its interest in sports talents in schools. She said: This year’s focus is on the role of the Olympic program as an important activity in schools to discover and care for talent. Olympic school program.

Fajr al-Kubaisi said: “Everyone is aware of and knows the important role of the Olympic school program as well as school sports where physical education physical material has become a material of success and repetition in schools and everyone cares about and there are tests in fitness.

Fajr al-Kubaisi pointed out that one of the important objectives in the school Olympic program is to meet teachers together to see the level of students from the participants in the program and this is very important for us to know the talent and hope to succeed everyone in this year’s version and achieve the desired success.