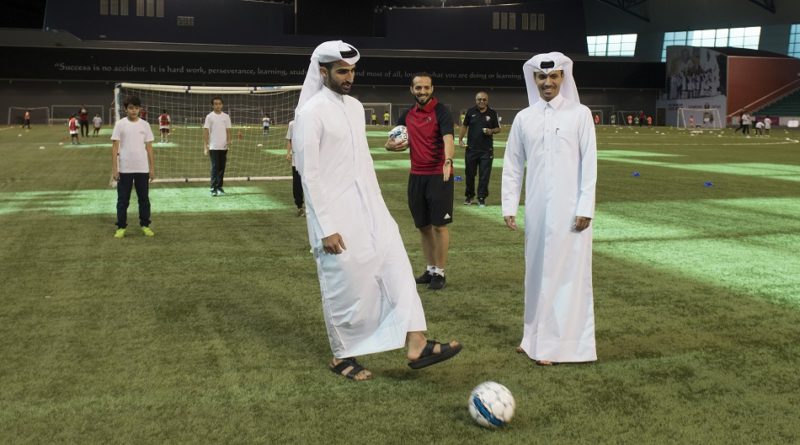 DOHA, October 29, 2019  (QNA). HE Qatar Olympic Committee (QOC) Secretary General Jassim Rashid Al Buainain announced that a new edition and strategy will be launched to support the School Olympic Program (SOP) in the coming period, while pointing out that the continuity of the program confirms to achieve the desired objectives so far.

Al Buainain’s announcement came at the opening of the 13th edition of SOP at Aspire Academy on Monday morning in the presence of HE Chairman of the SOP Organizing Committee HE Sheikh Khalifa bin Khalid Al-Thani and members of the committee, HE the Chairman of Qatar School Sports Association (QSSA) Rabia Mohammed Al Kaabi and the Chief Executive Officer in Aspire Zone Foundation Mohammed Khalifa Al Suwaidi.

The QOC Secretary General stressed the importance of SOP in statements after the opening of the program and pointed out that the program is under the auspices of HE President of Qatar Olympic Committee Sheikh Joaan bin Hamad Al-Thani, and that there’s also considerable interest from the IOC partners in the program, namely the Ministry of Education and Higher Education and Aspire Academy.

The students participating in these opening events demonstrated their high technical skills in front of the audience and confirmed their talents that helped them join the various clubs.

In this regard, Al Buainain explained that they made sure that the opening of the new version is the output of the previous version in terms of presenting the talented players produced by the previous edition so everyone can see them. He added that they also joined a number of clubs and thus achieved one of the most important objectives of SOP by providing talents to clubs to benefit from and provide them in the future to various national teams.

He added that there is cooperation between clubs, federations and schools, and that they consider the education sector as an important sector in the sporting career. He said that there’s many sporting talents provided by the program and may be used in the future, however, it isn’t the only goal, and there are other goals such as spreading exercise and awareness of sports and maintaining public health and the use of sport as a means of sustainable lifestyle.

HE Chairman of the SOP Organizing Committee HE Sheikh Khalifa bin Khalid Al-Thani said in a similar statement that everyone in the organizing committee will aim to present a distinctive version of the SOP this year in order to achieve the required goals of discovering outstanding talents and presenting them to clubs and to establish the culture of sport in Qatari society, which is important to make sport a lifestyle.

HE Sheikh Khalifa said that the 13th edition of the program is open with good participation from all, which seeks to be a record of participation among students, as well as schools, which serves its goal of sports in all schools in order to increase sports awareness and importance to students.

He added that the organizing committee will spare no effort in achieving the objectives of the program and that the committee will expand the base of participants in the program to different schools, noting that the program will serve as a strong tributary for  the various clubs and sports federations to benefit from the talent services provided by it.

For his part, Vice-President of the Organizing Committee of the Olympic Program Hamad Al Obaidli pointed to the distinguished opening of the Olympic program in view of the large presence, expressing his wishes for success to all to enjoy the competitions that will include various games.

He added the competitions will kick off next Sunday where students compete in 12 sports, including football, volleyball, basketball, gymnastics, swimming, athletics, table tennis, fencing, ground tennis, archery, chess and taekwondo). Girl students will compete in all these 12 games in addition to handball, he said.

Al Obaidli said that the organizing committee will do its best to come up with a distinguished edition this year and achieve the desired goals, adding that the committee will seek to attract the largest number of schools to participate in this edition, hoping to see great participation and competing in various games of the program, both for boys and girls.

Executive Director of the Schools Olympic Program Abdulrahman Al Muftah hailed the distinguished opening of the new edition of the program. He said that everyone is looking forward to success in all competitions and various games and that the competitions will be in the stadiums of clubs, federations and Aspire as well as in schools in order for everyone to participate in these events.

Al Mulla stressed that organizing the competitions of the Olympic program helps to discover talent through the presence of coaches and experts in different schools to follow the competitions in various games and this is done by the various associations as well as clubs and contribute to the discovery of many talents that will have a promising future.

Khawla Khaled Jamal, another member of the organizing committee of the Olympic program, stressed the importance of the School Olympic Program in Qatar because of its many benefits, especially for girls.

She highlighted the importance of sport for all, adding that the role of Olympic program is not only sports competitions and awards, but making sport as a culture among youth.