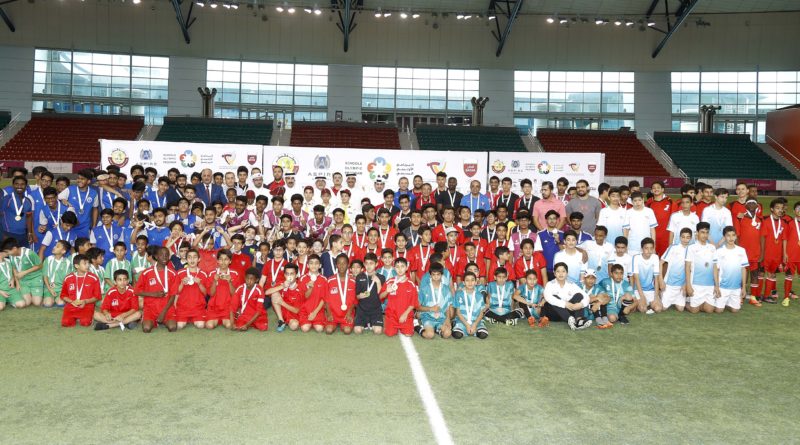 The Olympic Games concluded with the Olympic Games in its 11th edition, with the final matches in all the different stages and levels of the tournament in the presence of a large number of officials.

Several officials at the Academy of Sport Excellence (ASAF) have been keen to follow up on the final matches held yesterday to select the best elements for the academy and this is a strategic goal for the Olympic program to unload talent that can continue to play.

The final games were strong yesterday and the start was with the first level final of the primary stage and culminated in the Newton School team in the first place and gold medals, where he won the final match on the school team read 3/0 and won the bronze team team Abu Hanifa school.

In the second stage of the primary stage, the Malik Bin Anas School team won the gold medal by winning the final of the Jaber bin Hayyan school with a 5/4 penalty shootout after the original time of the game with a draw. Samisma School team won the bronze medal.

In the secondary stage, the MES Indian team won the first place and the gold medals, after winning the final of the Indian school Birla 1/0 and the Cambridge School team won third place and bronze medals.

Yesterday’s competition was strong amidst great excitement from all the schools that participated and aspired to be on the podium by winning gold.

And all enjoyed the level of technical provided by students, especially that a large number of them are not registered in any club and therefore a great opportunity for all clubs to choose the good elements and that can provide the best with them in the next phase and this is one of the objectives of the program to provide talent to clubs.

After the end of the competition, the Organizing Committee honored the referees who administered the matches and awarded them medals as a souvenir for them to participate in this edition.

The program promotes the importance of sport

HE Rabia Al Kaabi, President of the School Sports Union, confirmed that the conclusion of the football competitions was very distinguished by the large participation in all the Sunni stages.

He said: “The closing day witnessed a great deal of excellence at all levels, both technical and organizational. In general, effective participation is proof of the success of the program and we have seen the great excellence and clear importance of the program by giving participants the opportunity to compete sportively.

He added that the aim of the program is to promote the values ​​of the importance of sport, the honest competition and the discovery of talents and other noble values ​​that benefit the person, society and country of interest. Qatar has succeeded in being a leader in the implementation of the Olympic school program thanks to the directives of His Highness the Amir Amir of the country.

“The program has been a great success for 11 years. We have seen the level of interaction and participation that reached 98% of the schools. This is certainly a large number, which contributed directly to the achievement of the program for its objectives.

The ball finals came out fantastic

Ali Al-Hitmi, secretary-general of the School Sports Federation, said that the finals of the football have gone out to the desired level and achieved its goal in this version of the program, especially that the large participation rate of schools, whether governmental or private.

Al-Hitmi added: “I congratulate the winning schools at all stages, and this congratulations are not only for winning but also for the wonderful level they showed during the finals in Aspire yesterday, which contributed to the beautiful image that came out of the program this year.

Choose 70 players for the clubs of the winners

Said Al Marri, director of football competitions at the Aspire Academy and the football supervisor of the Olympic program in the 11th edition, it was outstanding, especially in terms of talent discovery.

Al Marri said: “In the football competition, 70 players were chosen during the final edition. This group of players will organize a three-day program. All clubs are invited to choose the right elements for them. The large number of players selected has never before taken place at the football level in the Olympic school program.

Olympic Program for the Future

Wesley Sneijder, the captain of Al Gharafa team, was keen to follow up on the final of the Olympic Football Tournament yesterday under the Aspire Dome and honored a number of the winning teams, expressing his great pleasure to be present at the event.

“It’s great to see young players at this age competing with that picture,” Schneider said.