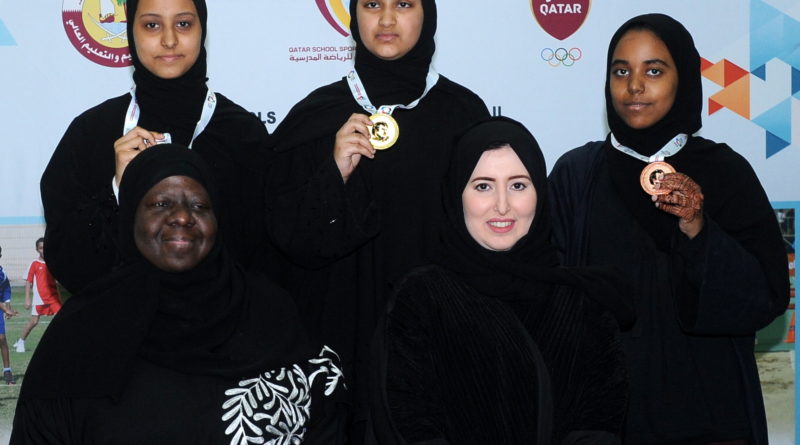 Loulwa al-Marri, head of Qatar Women’s Sports Committee, crowned the shooting champions in the eleventh edition of the Olympic school program in the shooting range of Blocil with the conclusion of her competitions at the level of girls.

Al-Anoud participated in the inauguration of Al-Anoud Matar Al Nuaimi in the presence of a senior member of the Committee of Women’s Sports in recognition of the great effort exerted by the players during the tournament, which came out distinctly confirms the success of this year’s version of the Olympic program in various games.

The results of the championship were good, as in the singles competition Venice 10 meters from the preparatory stage, Maha of seven from Rokaya School won first place, Aisha Al Mohannadi from Al Khor School finished second and Al Yafei was third.

In the individual pistol competition for 10 meters of air for the preparatory stage won the student Nour Tayeb first place and Mary Al Yazidi in second place and Hanan Al Abdullah from Al Khor school in third place.

The girls’ competition in shooting was strong and distinct. The number of participants in these competitions was great and most schools sought to have a presence in the shooting competitions in order to compete for the various medals, especially since the competitions were not limited to the individual, but there were competitions at the level of the different schools that existed In the tournament.

In the coming period, competitions will continue to be held in various games, especially the athletics games. The competitions will take place on Thursday at Suhaim Bin Hamad Stadium at the Qatar Club with the participation of many different schools.

The Organizing Committee of the Olympic School Program seeks to finalize the final competitions in the best way possible, highlighting the outstanding image of the program in this year’s edition, in light of the great interest of the Qatar Sports Sports Federation, headed by Rabia Al Kaabi, the organizer of the events. High as everyone is aiming to have the program in this year’s edition distinctive and in all games