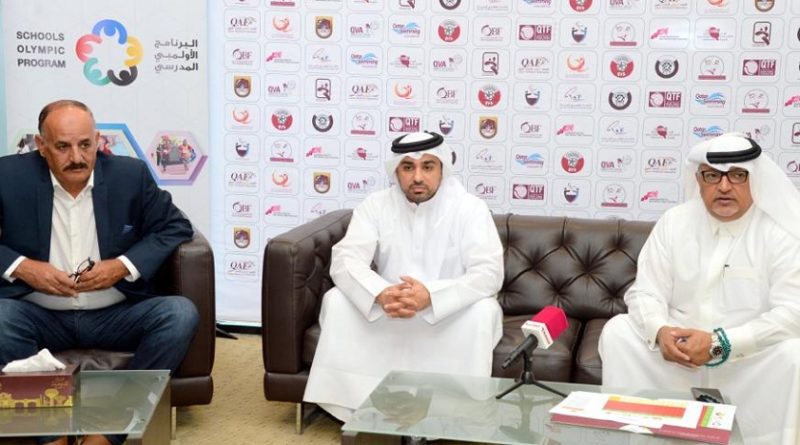 Doha, April 17, 2019. The Schools Olympic Program (SOP) is bracing for a thrilling finish, with boys’ teams gearing up to vie for top honours in five disciplines at state-of-the-art Aspire Dome on Thursday.

The details of event were revealed by the Secretary-General of Qatar School Sport Association (QSSA), Ali Al-Hitmi at a press conference held yesterday at Al Bidda Tower. In attendance were also Abdulrahman Al Muftah, Executive Director of QSSA, and Dr. Salah Salem, QSSA Technical Expert as well as other QSSA representatives.

Al Hitmi informed that the boys’ teams will fight for titles of football, basketball, volleyball, gymnastics and tennis during Thursday’s finals.

“Our preparations are on track and we are looking forward to provide best facilities to the competing teams. We wish success to all the competing students,” Al Hitmi said.

“We will be back at Aspire Dome for the finals. We want to thank Aspire for their cooperation which is playing a key role in success of the Olympic program,” QSSA Secretary-General added.

He pointed out that (SOP) is one of the successful programs that serves sports in general and school sports in particular. “The Olympic program has a huge importance and it receives great attention from the officials of the Qatar Olympic Committee under the chairmanship of His Excellency Sheikh Joaan bin Hamad Al Thani. One of the important objectives of the program is to establish the principle of sport for all,” he said.

Al Hitmi said the organizing committee was expecting a full house, saying invitation has also been extended to dignitaries.

“We are set to make it a big event. The invitation has been extended to everyone, including the Ministry of Education and Higher Education and the Qatar Olympic Committee, a large number of schools and students` parents. We have also invited a delegation of UNESCO in Doha to attend the finals and learn about the experience of the Olympic program,” stressed Al Hitmi. QSSA Secretary-General also stressed that the the organizing committee is looking forward to a great event on Thursday as this year`s finals will see a better organizational level.

Speaking about the girls` finals, Al Hitmi declared they would be held at the Qatar Women`s Sport Committee in the forthcoming days.

“This SOP is a huge advantage for schoolchildren. It gives them a platform to showcase their talent,” QSSA Executive Director added.

“We will leave no stone unturned in making the finals a huge success. The SOP has achieved a lot of success. This year we saw more participants and the level of competition has also raised,” he said.

Al Muftah also thanked Aspire for their support in holding the event.

“Aspire Academy is one of the most important sports institutions in the country. It contributes to the discovery of young talents. Aspire Academy logo – “today is the dream and tomorrow star” – does effectively work in a real world, Aspire has presented us with many stars in various games; this year`s edition witnessed not only a higher number of participating schools but also a better level of the event organization,” he said.

On his part, Dr. Salem pointed out Aspire plays an important role in the success of the finals.

“We are very fortunate to partner with Aspire, where the Academy’s excellent facilities and good playgrounds help students to offer their best levels,” he said.

“Aspire Academy has many scouts who contribute to the discovery of talent in various games and the work of different federations, which is important for the program,” Dr. Salah Salem added.